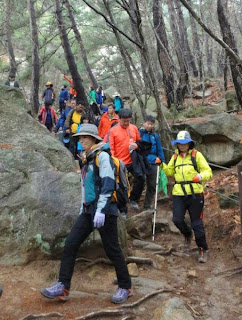 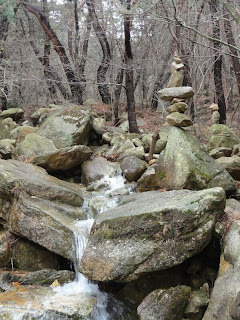 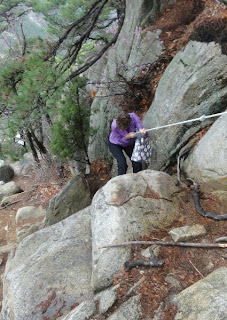 One of the most popular leisure activities in Korea is hiking, and we thought we would give it a go. The Koreans all look as if they have stepped out of the pages of an expensive outdoor equipment catalogue, so we were quite under dressed for the occasion.
We caught a bus to Mount Namsan, picked up a map from the information office and set off. All of the routes were carefully marked, although often only in Korean, and the paths were beautifully maintained.
We bumped into lots of other hikers, mostly in large groups who were all really friendly.
I have learned two words in Korean, one of them - annyeung haseyo - which means hello, was put to good use today as I got to use it constantly. As soon as I said it the whole group would yell it back to us and it would chorus with us along our route.
We got to the top with a bit of effort and chose to go back down along an intermediate trail, as it looked less steep than the advanced route.
After a few minutes we were surprised to find that the route got really difficult with signs in English that said 'slippery', and then another that said 'falling', which was right next to a long vertical drop.
Then we climbed around a rock and found a huge rock with a knotted rope attached to a tree that we had to use to abseil down to the next level. I went first and found out why most abseilers don't take their handbag with them - it only leaves one hand free to hold on to the rope.
Daz was standing at the top telling me to look up and wave, but I was getting stressed as there were no foot holds and I had to lean backwards and 'walk' down the cliff. He soon changed his tune when he had to do it himself, and he had two hands free.