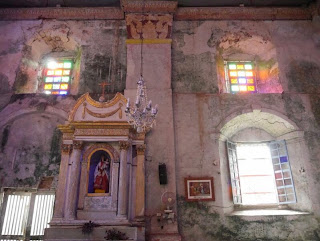 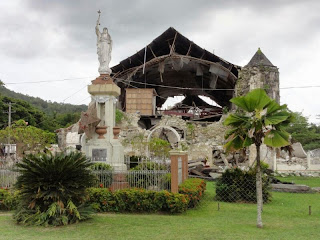 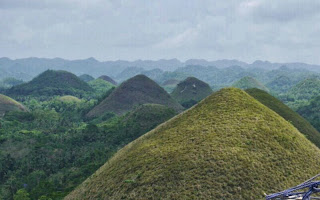 In October 2013 an earthquake devastated Bohol and destroyed or damaged many buildings, bridges, and churches. A few weeks later the typhoon hit the island and made the situation even worse.
The island is getting back on its feet, but the churches are in a terrible state.
We visited two, at the first the belltower had turned into a pile of rocks, although the main congregation area was intact, but covered in rubble and with holes in the roof.
The second church, at Loboc, had completely collapsed and looked beyond repair.
A large concrete bridge next to it was intact over the water, but the ramps up to it were badly damaged. A wooden staircase had been created for pedestrians to walk over and construction workers were attempting to demolish part of the large concrete bridge with hammers and chisels.
There was no modern machinery and the work was painfully slow - I imagine that without extra help it will take years to complete.
We also went to a tourist attraction called the Chocolate Hills, I think because in the dry season the hills turn brown, and maybe look like a box of Milk Tray.
I am not sure we saw it at its chocolate coloured best, but we could not get around to the most dramatic view. The viewing platform and building that used to be there collapsed during the earthquake so is now a fenced off pile of rubble.