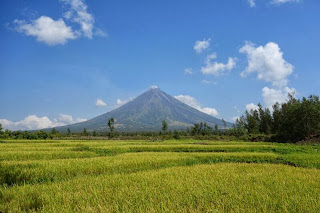 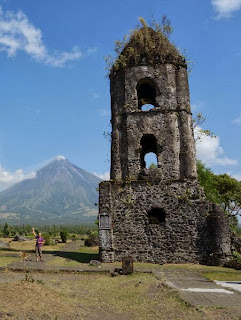 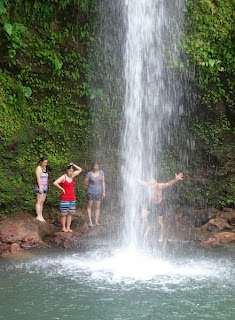 Went on a tour that took us on a complete loop around the volcano today.
Our first stop was Cagsawa church which is on a slope directly below the volcano. Today there are beautiful rice terraces, but in February 1814 there was a massive eruption and hundreds of townspeople took shelter from the lava in the church.
Unfortunately, the lava rolled on past the church, destroying it and killing all of the people who were inside. The only part left standing was the belltower.
It has not been rebuilt, but instead the locals built another church on higher ground a few of kilometres away.
Afterwards we visited a viewpoint which had a notice that said that the area is currently on eruption warning number one and that there is a six kilometre exclusion zone in force.
We have no idea if number one is the lowest or highest risk, but all seemed calm today.
Later on in the day we swam in a pool below a waterfall. Look carefully and you can see Daz impressing the local ladies with his jumping technique.