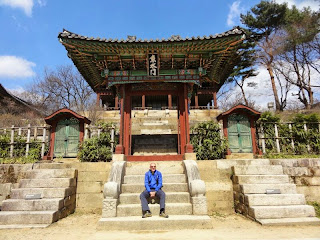 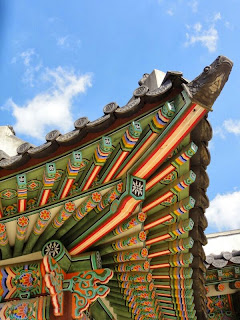 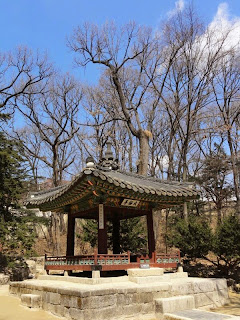 We woke up to bright sunshine this morning, which was very welcome as it meant that the temperature reached 10 degrees Celsius. It is amazing how quickly we have adapted to the change. Instead of getting up early to avoid the heat of the day, we waited for the sun to get higher in the sky before venturing out. We then walked on the sunny side of the street, rather than keeping to the shade. (Four layers of clothes helped too.)
It seemed a good day for sightseeing and as Seoul has five royal palaces we thought that we would start with one of them.
Changdeokgung is a very well preserved palace, with an enormous secret garden. It was originally built between 1405 and 1412 although most of it has been destroyed and rebuilt since then.
It was home to the royal family for five centuries and the kings had lots of rules to show that they were superior to everyone else. For example, all of the buildings had three doors, a large one in the middle that could only be used by the royal family, and smaller ones on either side that were used by the rest of the court, and which were always so low that users had to stoop to get through them - pic 1.
The garden was lovely, with lots of pavilions where the king could sit and enjoy the views. The trees are still bare of leaves, but buds are appearing everywhere, so Spring is on the way.