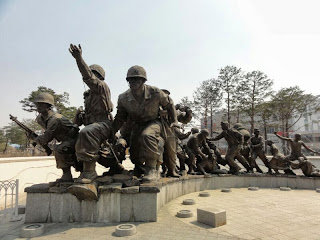 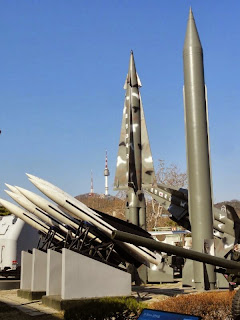 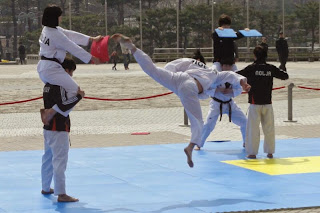 We spent most of the afternoon yesterday at the War Museum, and went back today as there was still loads left to see.
There is a huge statue outside the front of the museum, and then surrounding it are massive displays of aeroplanes, tanks, helicopters, boats and rockets. Most date from the Korean War (1950-1953) although there are more modern examples too.
Once inside the Museum everywhere is completely immaculate and it explains what happened during the Korean War.
The section that we toured today covered the help that South Korea received from foreign countries and the UN, who helped to push the Communists back over the border.
It was extremely respectful and moving, and showed how grateful the Korean people were. It also highlighted how the country was devastated by the war, and how it has rebuilt itself over the past 50 years.
On the way in today we came across a martial arts demonstration to K-pop music, so sat in the sunshine enjoying the show.