Missionaries in the mountains 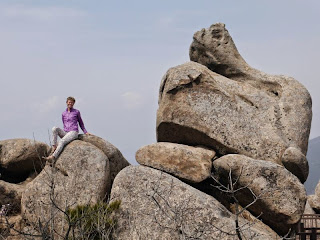 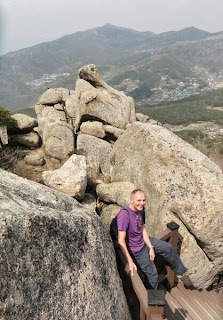 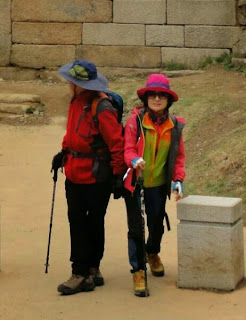 We decided on another hike today, this time at the Geumjeong Mountain Fortress.
We got off the subway at the bottom of the mountain, and were planning on having a coffee and breakfast before setting off. We walked all around but nothing was written in English, and non of the restaurants had anything in them that we recognised, or fancied eating.
In the end we found a little corner shop selling ice creams, so that was our breakfast, and we bought a packet of biscuits to share for lunch.
On the way to the cable car a friendly Korean said hello and asked if we were missionaries. Weird question, we thought.
Our walk from the top of the cable car was along the route of a giant walled fortress - it was good, but not quite like the Great Wall of China, although the stylised map that we picked up gave that impression.
As usual, we passed loads of immaculately dressed Koreans, all very friendly, and who seem unable step outside without full hiking kit, hat and walking poles.
At the very highest point was a rocky outcrop, which was a great photo opportunity, and then we walked down towards a village.
Walking up towards us was a Korean guy, who was loudly singing 'Glory, glory hallelujah', and as we got further down we heard it from loudspeakers.
We passed a sign in English saying 'Caanan Moral Retreat', and saw a large group of people standing in a circle, so we sidled quickly past them, just in case they tried to convert us.