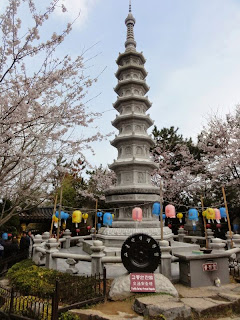 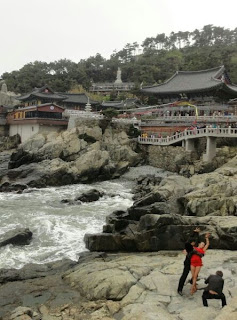 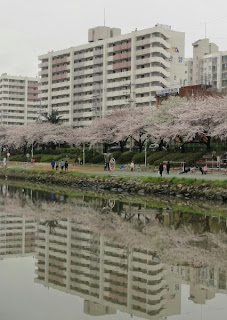 Completely by chance today, we stumbled across the Traffic safety prayer pagoda. It had a large tyre in front of it and people were stopping to say a few words.
It was quite apt really, as we seem to have spent almost the whole day on public transport, so it was nice if something was looking out for us.
Unfortunately, I have to report, that the things that we spent so much time travelling to were not really worth the time and effort that we took.
Firstly we caught a subway train and then walked along a stream that runs through the centre of Busan. It was raining, but there were lots of people out enjoying the fresh air and cherry blossom, and it was very pleasant.
After this it started to go a bit downhill, as we caught another train, then had to wait for a bus, which took ages to get through the traffic to a seaside temple.
It was packed solid with people shuffling around really slowly, so we decided to give it a miss and view it from a distance instead.
It didn't look very exciting but bizarrely, there was a young couple on the rocks performing what looked like a tango (without music) while a film crew videoed them.
They were very good and it helped brighten up my photo, which otherwise was looking very grey.